Living in a houseboat... Next to the Louvre 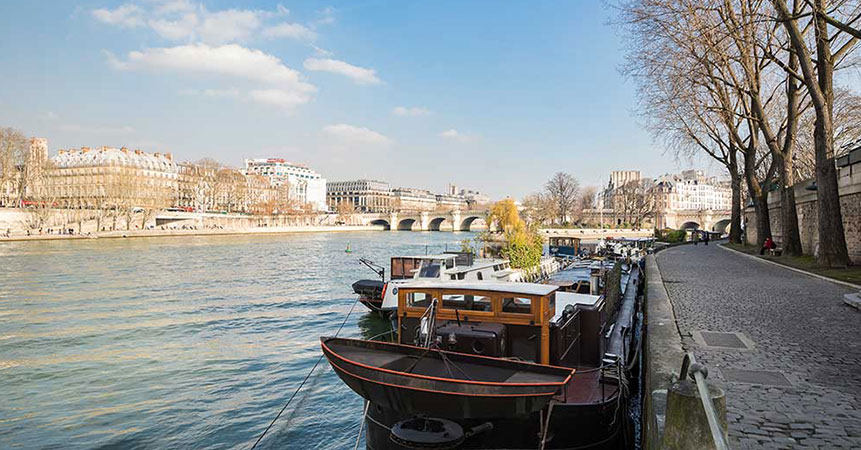 Is it possible to find a more beautiful address in Paris? This unusual barge, referred to as “Monique,” has indeed been casted off the Quai Conti (6th arr.) since 1974, in front of the Pont des Arts and the French Academy. This unique address allows one 'to live a magical moment every morning. Having breakfast in front of the Louvre, you’re the only person in the world in the center of Paris ...,' says its owner.

Built in 1923 on a German site given to France as war damage, this 39-meter-long barge was used for transport until its transformation into a houseboat in 1974. It was then transformed into a double apartment with a total area of 178 sqm. With its library and its wooden stove, the salon inside distils an atmosphere that's out of this time. The bronze portholes remind one that you are aboard a boat, while just in front of you runs the Seine along with the “bateaux-mouches” passing by. On 130 sqm, the three bedrooms, the open kitchen and the office compose a perfect family together, while at the bow, the second apartment (48 sqm) can be made independent thanks to its separate entrance.

The current owners proceeded 5 years ago to a complete renovation of the barge, which is today decorated and furnished resembling the most exquisite of Parisian interiors. On this occasion they had the engine disassembled, as it was no longer up to the standard. It is thanks to a tug that they take her to the shipyard of Saint-Denis for regulatory inspections. 'This 3 or 4-hour cruise gives one another idea of time, so getting around with your apartment is a real experience! '

Is it easy to live on a barge in the heart of Paris, at the tip of Ile de la Cité? 'It's a permanent delight,' says Monique's owner. “We live according to the cycle of seasons, in winter by the fire, in summer on the terrace. With the Louvre, the French Academy, and ducks and cormorants as neighbors! It just takes some organization, but it comes naturally. When I go shopping in rue de Buci, I say that I go ashore ... '

Does this property interest you? Contact the real estate agent of this prestigious house!

Read this article in its integrality by clicking on the following link:
https://www.barnes-internation...